From the time she was just a child, Jieyi Lee has treated the paper as the sea in which she can dive into her imagination; her pencil as the vessel of artistic exploration. Growing up in Taiwan, she would draw for hours, in her own peaceful little world, surrounded by noise and boisterous activity. Art was where she could find true happiness. She knew without hesitation or question that she would be an artist in some capacity when she grew up, never wavering from that guiding light. Now, as an internationally sought-after motion artist, she has achieved that childhood dream and shown audiences around the world just what she is capable of.

Throughout her career, Lee has worked on many celebrated projects that have allowed her to showcase her talent and creativity. Last year, she created the logo for the box office hit Hustlers, perfectly encapsulating the heart of the film in the typography, and was able to display her raw artistic skills with Facebook’s Valentine’s Day event, “Facebook Live: Valentine’s Factory” where she was one of only fourteen artists chosen to create cards live on the platform for the world to see her process. She has won awards and contributed to the success of many important projects, but it was her most recent project that she would deem the highlight of her career, and that is Netflix’s new original movie Enola Holmes.

“When I first read the brief, I was very excited about the concept and the possibilities to flex my artistic muscles for such a fun film. I really enjoyed brainstorming and exploring creative concepts for the film’s logo that would be used in the promotional trailer for Enola Holmes,” said Lee.

“Enola, in many ways, is a young woman ahead of her time. Headstrong and brilliant, she doesn’t quite fit into her Victorian English society where women wear dresses and mostly keep their opinions to themselves. The rebel part of her is the main part of what I like about this project. It shows that women have so many strengths, and that they are capable of doing whatever they want to achieve. It delivers a good story to a young audience about how having confidence and staying true to yourself can be the most powerful thing in the world,” said Lee.

Lee remembers the day she was asked to take the lead on the logo for the film. The producer came to her, excited after seeing Lee’s previous work on the CW’s Nancy Drew, Fox Teen Choice Awards, and How I Met Your Mother promos, all showcasing her outstanding storytelling technique with color, drawing and unconventional approach to the projects. The producer told Lee that she was the perfect person to work on this project, and she was right.

“I have a special knack for telling compelling stories using design and animation. My illustration skills are a key contribution to our in-house design team, and my designs raise the production value of the projects I work on,” said Lee.

To bring this intrepid young detective to the screen, Lee wanted to give the design that wonderful dichotomy of the Victorian age crossed with a more modern sensibility. She wanted to embrace what makes her a lady, but show that she can stand toe-to-toe with (and sometimes head and shoulders below) the men in society. Lee brought her sketches into the design, incorporated pop-twinged detective iconography and gave it a youthful, modern twist that embraces the character’s quirky fun. The mix of the masculine and feminine, business and play, and period and modern sent us down a delightful path that resulted in a lively design that invites the viewer into Enola’s world of adventure and mystery.

“The Enola Holmes logo design was a unique job for me because not every job fits your personality and skill sets, but on this project I was a natural. The final design that won the pitch was one that I had created in the very first round of design. When my creative director Paul saw it for the first time, he said, ‘This is it.’ The progress was really smooth and very satisfying,” said Lee.

The trailer garnered over 11.5 million views on Millie Bobby Brown’s Instagram page, not to mention the 8.1 million views on YouTube. Lee’s logo has been used in the promotional material for the film all over the world, including the Netflix home page as many log into the popular streaming service as a featured title. The film, which was released September 23, 2020 has been an instant hit for Netflix, debuting at number 2 on Netflix’s most watched list, and Lee’s logo is a big part of that.

If you haven’t seen it already, check out Enola Holmes on Netflix now. 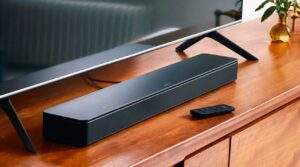 Next post Are Soundbars Worth it? Why you Consider a Soundbar