Small children, especially preschoolers, often find it difficult to share their Christmas toys and treats. There is sometimes a good reason for it. A child’s toys are extensions of himself, for they are the only things that are his very own; it is through their use that he often expresses his feelings.

If he doesn’t feel friendly, he just doesn’t want to share his personal things. Besides, a child feels less helpless in a large and powerful world when he can control his own belongings. Hence when parents insist that a child share his things, they are often making him give up much more than the mere object involved. 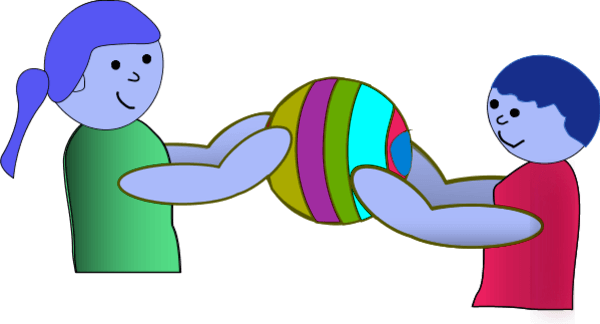 Nonetheless, it is important, and it is possible, to teach children to share.

The first step is to stop feeling ashamed of your child’s “selfishness.” (Worrying about what others may think will not prevent any sharing struggles.)

Next, you should realize that you will not find a magic cure overnight. The sharing problem will disappear gradually, partly as a result of your child’s entering into the give-and-take of playing with other children.

In the meantime, however selfish he may seem to be, you should try to have full respect for his rights of ownership and gradually train him to share voluntarily. Sharing your own belongings with your child is a major aid in helping him learn to share his.

A little girl, for instance, may be allowed to parade around the house in her mother’s fancy jewelry – as long as she puts everything back in order in the box. The freedom to use your possessions will make sharing a more familiar and easier experience when the time comes to share toys.

You can ease the not sharing situation in other ways. Before visitors arrive, you and your child can put away the toys that mean the most to him if you know he really doesn’t want to share them.

It will help if you have some duplicates among the toys you leave out, or if you present your child and his guest with things that they can both use at the same time – balloons, colored chalk, or building-blocks.

You can also show your child that he can have a better time and more fun through sharing.

Two children playing with equal numbers of toy soldiers are not likely to squabble about what’s “mine.”

A good many co-operative activities absorb children and bring them pleasure in sharing – having a doll’s tea party, cooking on a toy stove, drawing two halves of a picture together, marching along with toy animals or carts to pull along.

In spite of your best efforts there still will be times when your child will scream violently and hang on for dear life to some object that another child covets. When this occurs, try first to separate the children and then find a substitute toy or object for the other child and present it to him as a special treat.

Or offer to play some simple game with the other child: building a sand castle or bouncing a ball. Also, let the other child and his mother know that you do not condone selfishness.

“Jimmy has trouble sharing right now,” you can say.

Later he’ll be able to share his things and have more fun with other children. In the meantime it is Jimmy’s toy, and he can keep it to himself if he wants to. Remarks of this sort will help everyone concerned.

And, most especially, your listening child will have the reassurance that he may hold on to his things – but that you will still help him learn to share them with his playmates in gradual and pleasant ways.

How And Where To Execute Your Assignment

Use of Data Science Applications in Cloud Migration

Recommendations For Writing The Conclusions Of A Thesis

How And Where To Execute Your Assignment

How To Choose The Right Influencer Marketing Agency for Your Business

What You Need To Know About Hydraulic Motors

Use of Data Science Applications in Cloud Migration

Tips To Prepare Your Kitchen For Small Parties

What Is the Difference Between Agile Testing Vs Traditional Testing? Are You Making The Right Choice?

Why Is Bali Best For Yoga Teacher Training?